Voltaggio was subject to the Obertengo dominion and to the lordship of the Bishops Counts of Tortona in the 10th century, then in 1121 it passed under the dominion of the Republic of Genoa.

THE ORATORY OF SAN GIOVANNI BATTISTA

Inside this religious building important paintings are preserved.

“San Sebastiano and the pious women” and “The Baptism of Christ” by the painter
Domenico Casella.

“The Virgin, Santa Chiara and S. Michele” by the painter Giovanni Battista Poggi.
“The Miracle of Saint Egidio” and the “Beheading of the Baptist” by the Voltaggino painter Bernardo Carrodio.

But the place of honor belongs to a painting by Sinibaldo Scorza dated 1617 “L’Immacolata”.

The Villa Morgavi, already the seat of the Albergo dell’Aquila in 1647, hosted Vittorio Emanuele and Maria Teresa visiting the Genoese territory in 1815.

THE ORATORY OF SAN SEBASTIANO

The Oratory has significant architectural features: the accentuated vertical feeling of movement of the front, the other niches surrounded by pilasters and the median
entablature with a strong overhang.

The interior has a single nave of complex geometry with a circular apse. 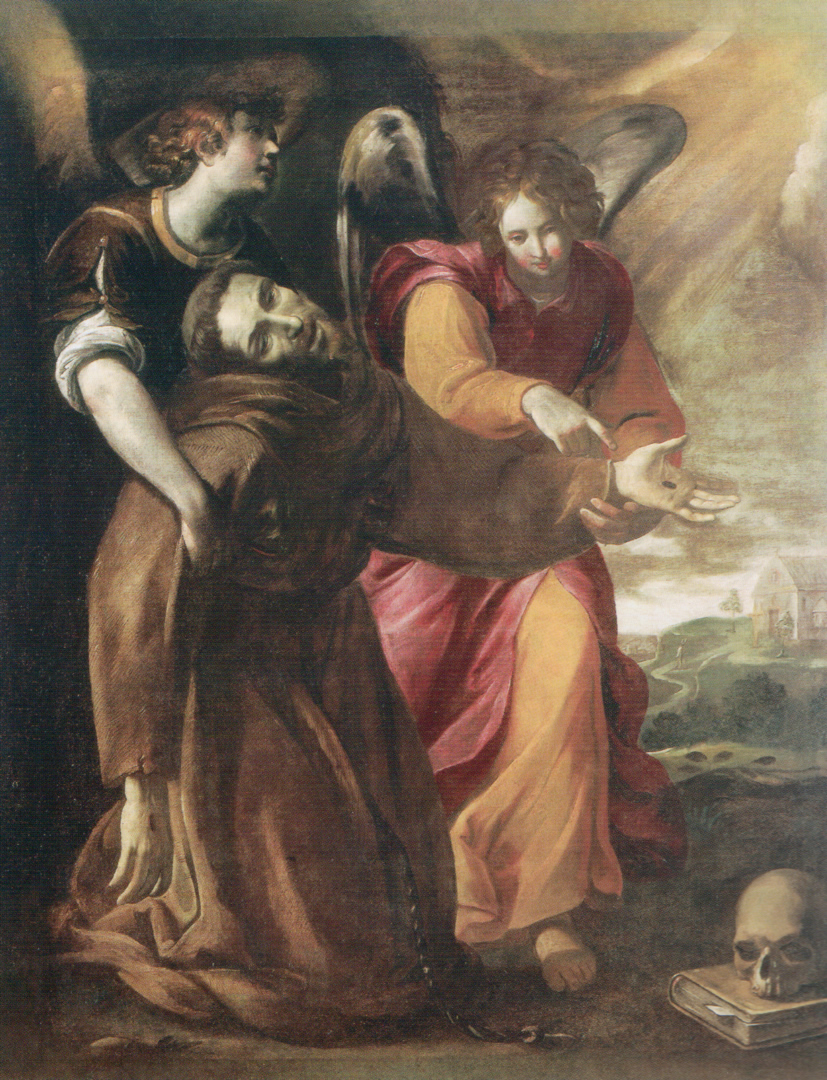 Founded in 1854 and further enlarged in 1882 by Doctor Giambattista Romanengo, it was for over half a century a point of reference for the Genoese bourgeoisie for their holidays.

In front of Palazzo Spinola stands the Palazzo Comunale, formerly the seat of the “noble order” judge designated by the Republic of Genoa to govern the “Potestate of Voltaggio”.

Inside the council chamber there are some paintings of the Genoese school of the seventeenth-eighteenth century, including a portrait of the Genoese notary Carlo Bisio and a “Landscape with ruins” attributable to a follower of the painter Antonio Travi called “Il Sistri”.

THE PARISH CHURCH OF S. MARIA ASSUNTA AND OF THE SAINTS NAZARIO AND CELSO

The Church was built in 1202: however the origins of the church could be much earlier.

Inside the church there are twelve altars.

The main altar was built in wood, then in 1770, replaced with marble by Pompeo Scorza.
The altarpiece above the altar depicts “The Assumption of the Virgin” and was painted by Sinibaldo Scorza in the second decade of the 17th century.
At the second altar, a plaque commemorates Father Francesco Scalioso who initiated Sinibaldo Scorza to an apprenticeship in the Paggi workshop.

Other works preserved are:
Polychrome wooden sculpture by Antonio Maria Maragliano, Rounds of the Mysteries of the Rosary painted on copper by Sinibaldo Scorza, Marble bas-relief from the early 16th century;
Commemorative inscription commemorating the visit to Voltaggio on 15 June 1815 by Pope Pius VII.

In the internal sections of the vault there are frescoes carried out in 1690 by the painter Carlo Donati depicting the most famous exponents in the religious history of Voltaggio:
Giovanni Battista De Rossi, beatified by Pius IX in 1860 and canonized by Leo VII in 1881;
Maria Repetto, a nun of the Brignoline Sisters, beatified by Pope John Paul II on 4th October 1981. 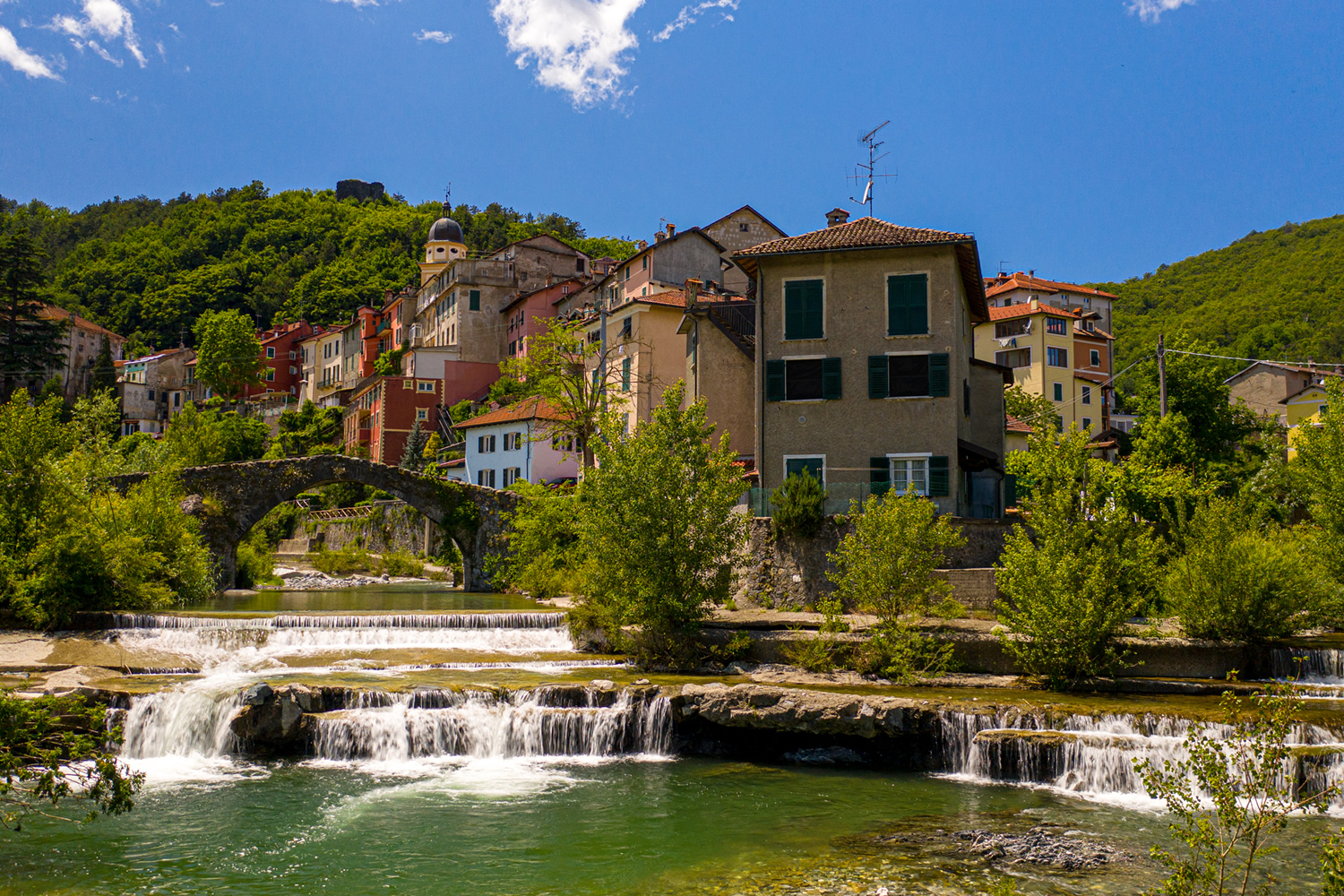 Nicolò Olivieri and Maddalena Bisio, faithful collaborator with the work of the venerable Olivieri.

This Palace preserves tombstones dating back to the XII – XIII century: the oldest dated 1161 provides the first evidence of the existence of the castle on the site.

The Palazzo is the historic residence of the Scorza family, where the painter Sinibaldo Scorza, descendant of the Counts of Lavagna, was born on 16 July 1589

This Palace from the late 1500s, originally belonged to the local branch of the De Ferrari family.

An inscription in elegant Latin in the atrium of the entrance recalls that Philip V, King of Spain, who stayed there in 1702.

It was the summer residence of Maria Brignole Sale in the second half of the nineteenth century.

Administered by the brotherhood of the same name, which adopts the white overcoat with a small light blue cape, the brotherhood is referred to as the “Compagnia del Riscatto e della SS Trinità”.

Relics of San Clemente Martire exhumed from the cemetery of Callisto on the Appia;

Painting commemorating the event performed by the painter Bartolomeo Agosti;

Polychrome wooden statue of S. Giovanni Battista De Rossi from the second half of the nineteenth century;

Romanesque bridge that leads to the peri-urban area of the Mulino Basso (Low Mill) where the De Ferrari Ironworks operated in the 19th century.

The exposed stone artifact, with two asymmetrical arches, parapet and rosti, represents the oldest building in the Municipality.

THE ORATORY OF SANT’ANTONIO ABATE

The existence of this oratory dates back to 1582.

The Congregation of Santa Maria in Portico was established in this oratory, under the title of Sant’Antonio Abate.

THE CONVENT OF S. MICHELE ARCANGELO OF THE CAPPUCCINI FATHERS

The building, built in 1603, has preserved the tradition of the Franciscan presence.

In the church there are:

Wooden sculpture of the Assumption made by BARTOLOMEO Carrea;

The statues of the Nazarene, the Addolorata and the deceased Jesus from the School of Graziano da Faenza;

Crucefix of the Maragliano and 15 relief panels of the Via Crucis, a French work of the 18th century;

250 articles collected in the second half of the 19th century by Father Pietro Repetto.

Furthermore, the central nucleus of the collection, began in 1877 and continued by the religious father Pietro Repetto, consists of over one hundred paintings that assemble some of the most prestigious names in Genoese painting.

It is the second most important conservatory in Piedmont.