The current castle dates back to the end of the 15th century and was built by Luca Spinola who was knighted Knight of the Golden Spurs by Charles VIII, King of France.

This imposing building which opens onto the ricetto square, has preserved, among the most ancient fortifications, the round tower that dominates the Piota Valley.

On the east wall there is a huge Spinola coat of arms.
At the center of the castle there is a characteristic fifteenth-century triangular courtyard with stone arches and columns and mullioned windows.

Inside, numerous halls and other rooms display a rich collection of paintings on the walls, including some of artistic value (Rubens, Van Dyxk).

There are also antique period furniture and furnishings.
Worthy of note is the gallery of the coats of arms of the joint families: Doria, Pallavicino, Negrone, etc.

The castle, like many others in the Oltregiogo, was also studied by the architect Andrade.

On exiting the Castle and the Church, a descent enters the “ricetto” (fortified area) which develops on a spur overlooking the Piota.

The ricetto was equipped with two entrances: one down the valley and the other pertaining to the castle.

The typology of the buildings of the ricetto which have two superimposed rooms opening on the ground floor and one on the upper floor is very interesting.

Worthy of note: the chimneys of the side streets to the west and the structure of some stone portals dating back to the 11th and 12th centuries. 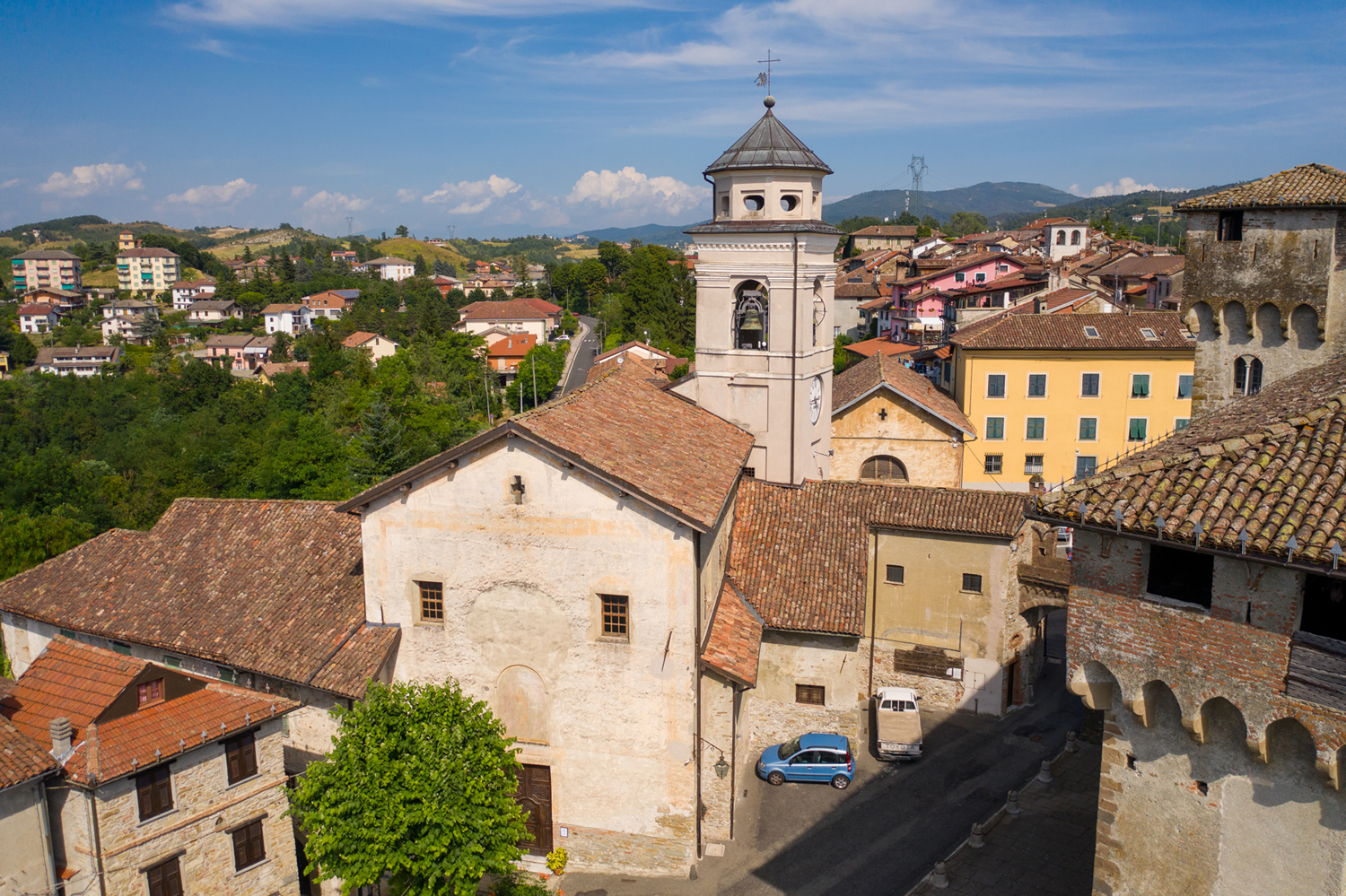 Of the primitive castle, in addition to the circular keep, one of the towers of the enclosure remains, adapted to the apse of the parish church.

Inside, at the center of the apse there is a niche, protected by a shatterproof glass, where the precious panel depicting the Virgin and Child by Barnaba da Modena is placed.

To the side the wooden busts of Saints John and Peter.

To the top there is a painting by an anonymous painter of the Genoese school which depicts the Baptism of Jesus by the Baptist: it is a work dated 1608.

On the sides Agostino and Cecilia Spinola, feudal lords of the castle, are depicted kneeling.

There are also other important works:

– San Francesco, the Holy Family and another Saint, separated by squares with the Spinola coat of arms, which the Historian Emilio Podestà attributed to Giambattista Paggi;

– Canvas of San Carlo praying and the Baptist in the presbytery;

– Plaque from 1612 that commemorates some enlargements of the church commissioned by the Marquises Spinola;

– Crucifix of the XVIII century by Anton Maria Maragliano. 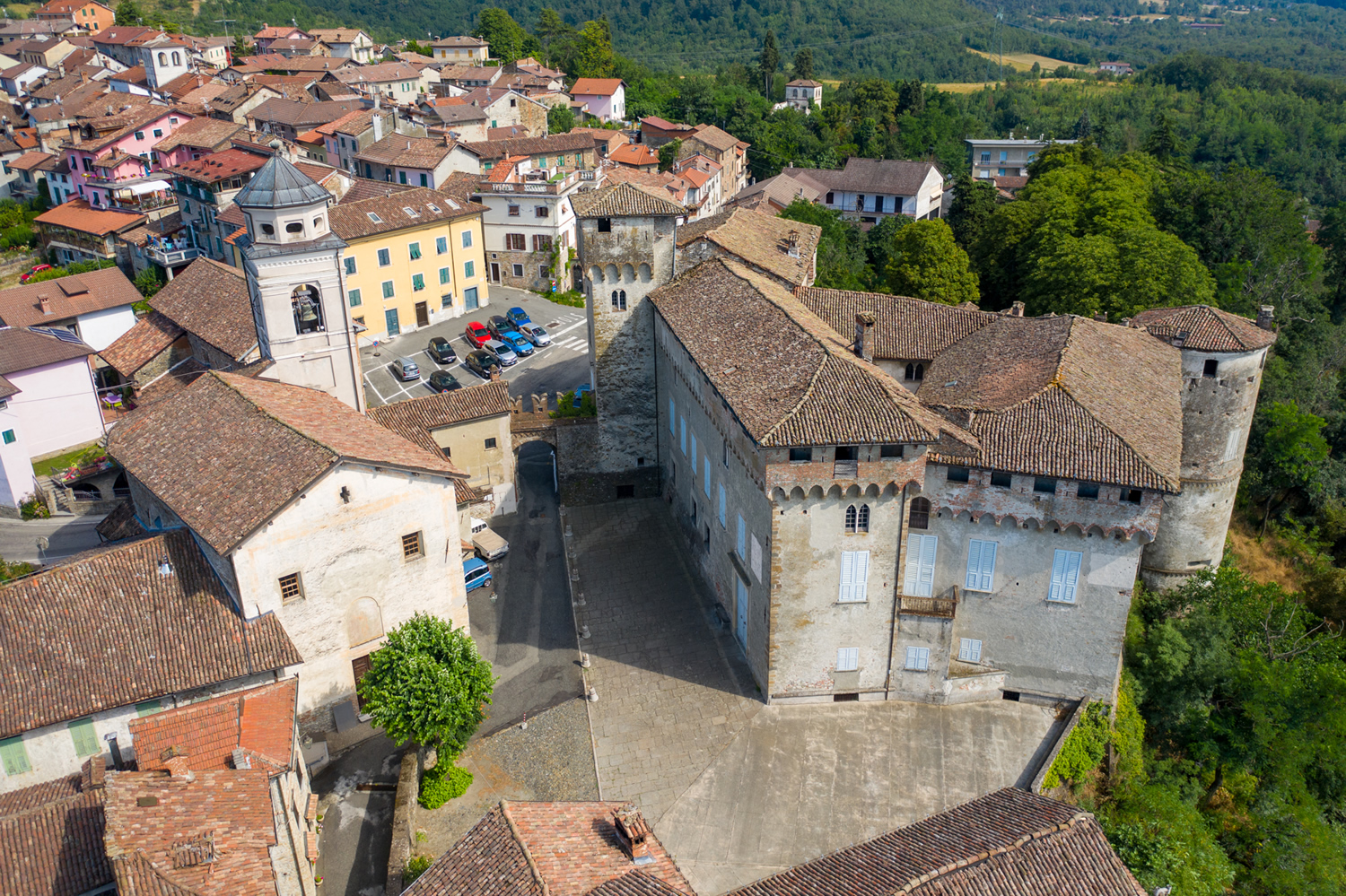 This church, probably built in the 11th century, is now incorporated into the cemetery.

For a long time, until the beginning of the 16th century, it was the parish church of Lerma, then it ceded its role to the oratory within the walled village.

On the external façade there is an imposing “San Cristoforo” protector of travelers and fords dated 1512.

Inside the apse and the right wall are richly frescoed and have remarkable similarities to painters such as Galdino Da Varese have been found.
In the apse there is the figure of Christ Pantocrator within an almond, to which the symbols of the evangelists are juxtaposed.

Below, in niches separated by twisted columns, the figures of the Saints: Michael, Peter, Giovanni Battista, Lorenzo, Giacomo and Benedetto are to be found.
The northern part of the Church is entirely occupied by a “Via Crucis” with sixteen stations by an unknown author called “Maestro della Pieve di Lerma”.

THE SANCTUARY OF N.S. OF THE ROCCHETTE

On the road from Tagliolo to Lerma, before the Piota river, a road branches off to the right that leads to the Sanctuary of NS. delle Grazie, called “Delle Rocchette”.

In the building is the guesthouse that offered accommodation to those who travelled the ancient “salt road” that connected the Oltregiogo with nearby Liguria.

Legend has it that the mountain in front of the Sanctuary was the place of collection for the gold extracted in the valley by the slaves who found asylum here and, once they converted to Christianity, erected the primitive Sanctuary there.

Along the road, the largely eroded pillars of the Vuia Crucis are still visible.

The Church was, at the end of the 13th century, a subsidiary of the Monastery of S. Maria di Banno.

During times of plague and war, the Sanctuary was a destination for pilgrimages and a reference point for the faithful who begged for deliverance and protection to the Virgin Mary.

Votive offerings can still be found.

The recent history, of the dark years of the last war, led to the rebellion of a priest of Mornese Don Luigi Mazzarello, awarded the title of “Righteous among the Nations” who saved several Jews in a daring way, including Levi’s brother from Nazi-fascist barbarism .

Don Luigi Mazzarello was the last chaplain of the Sanctuary.

On the border with Silvano D’Orba and Castelletto D’Orba there are the ruins of the “Torre dell’Alabrola”.ù

It was part of a defensive lookout system created against the invasion of the Saracens in the year one thousand.

Its task was to pick up the signals from Monte Colma and transmit them to the Torre del Gazzolo in San Cristoforo.

Towards the end of the 17th century, the Abbey of San Filippo Neri was built near the tower, from which the current name of Cascina Abazia derives.