The first urban settlement was founded by San Colombano, an Irish monk who was born in 540 and who died in 615 in the Bobbio Abbey which he also founded.

The first name of Belforte was“Uxetium”which Charlemagne added to the Contado di Acqui.

The village and the Castle of “Uxadium” are mentioned for the first time in a document dated 1217.

Belforte passed, in the fifteenth century, under the Marquises of Monferrato, but the Spinola family remained as feudal lords.

The existence of the castle dates back to 1224 and was on a site other than the current one, that was sold to the Municipality of Genoa, to which the heads of the family swore allegiance in August 1224.

The old castle was later destroyed, it is thought by the marquises, or it was deliberately demolished due to family quarrels between the various Del Bosco marquises.

Presumably the old castle stood in the Bertarelli area.
Above, far from the village, was the Monastery of San Benedetto with the nearby church, still well preserved and dating back to the 12th-13th century.

The current castle was built in the mid-nineteenth century by the Marquis Carlo, a good painter, surrounded by greenery, almost hidden, and from the ancient tower there is a breathtaking view.

These two peculiarities “clearly visible tower and hidden castle” make it clear that the castle had been an ancient monastery, while the tower was used as a “lookout tower.”

To the right of the atrium is the chapel, to the left there is the open staircase leading to the residence and reception rooms of the castle.

Towards the end of the 18th century, the feudal lord had a chapel built in the castle with two entrances.
It was named after Santa Caterina da Genova, a saint who, for having belonged to the family Fieschi-Adorno, was closely linked to the noble world of Oltregiogo.

THE CHURCHES
The oldest church in Belforte is the one linked to the Monastery founded by San Colombano, a church placed in a solitary position in the woods, called San Benedetto.

The church of San Colombano, built as a parish church, only in the years around the turn of the century. XV and XVI, but of more ancient origin, was built with a single nave and had the right to a cemetery. Being in a peripheral area.

The Chiesa Nova di Santa Maria, dedicated to the Nativity of the Virgin, began administering the sacraments on January 18, 1598 and was located in the town. 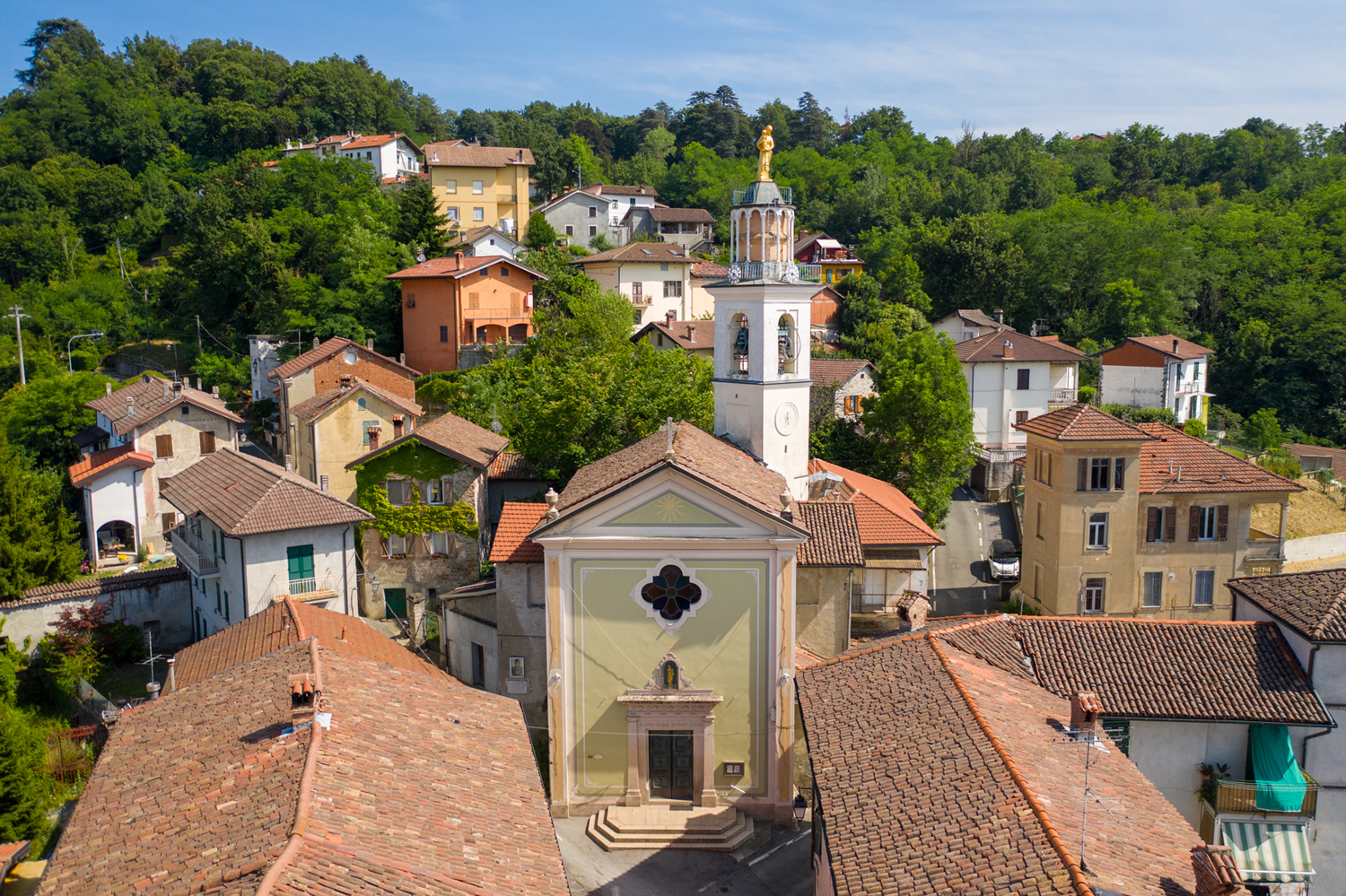 THE PARISH CHURCH
Initially it had a single nave: today it cn be seen from afar with the bell tower surmounted by a statue of the Virgin and Child in gilded bronze, the work of Don Wandro Pollarolo.

The interior has kept the original layout: it has a single nave and boasts three altars.

Works:
– main altar surmounted by a small temple characterized by two rampant marble eagles whose claws rest on sheaves of grain and bunches of grapes.
– At the side of the altar an ancient tabernacle in lava stone.
– Dating back to the Baroque period, the statue of the Madonna del Rosario, which
according to tradition, arrived from Milan after a journey that lasted about twenty
days, loaded on a cart pulled by oxen.
– Altarpiece of the Crucifixion by an unknown artist of great pictorial value donated by the Grimaldi family, which contains the mummified bodies of the family’s feudal lords.
– The Ranieri of Monaco, descendants of the Grimaldi family, ordered that the access should be walled up.
– Aedicule depicting the crucifixion with St. John and the pious women and a plaque commemorating the passage through Belforte of Don Bosco on his way to Mornese.

THE ORATORY OF THE SS ANNUNZIATA

This oratory was founded in the sixteenth century from the zeal of the “Disciplinati” who a century earlier were guests in S. Benedetto.

In the early twentieth century, to raise funds, the Confraternity organized a theatre company whose proceeds were destined to finance the activities of brothers in difficulty The Oratory building has a single nave and a single altar that contains a beautiful altarpiece “The Annunciation of Montecucco” (19th century).

There are the statues of S. Rocco and S. Sebastiano patrons of the Confraternity.

On the walls the processional crucifixes of particular beauty, value and grandeur

THE ROMANIC CHAPEL OF SAN BENEDETTO

This Church, which dates back to the XII or XIII century, is built on the remains of the ancient monastery founded by San Colombano in the VII century.

The Church today has a gabled façade, a single nave and terracotta tiles.

Above the altar there is a painting of the Madonna and Child enclosed in a richly inlaid wooden frame.

The frescoes on the sides of the altar represent San Vincenzo and San Barnaba.