UNESCO candidacy for inclusion in the World Heritage Site of Architectural and Urban Environmental Emergencies of the area built between Oltregiogo and Oltremare (overseas areas), a network of the main Genoese settlements from the Mediterranean to the Black Sea.

This is how this Unesco Oltregiogo-Oltremare tentive list project was born, which became a reality with the signing of the “Novi Charter” carried out by all the members of the Project at the Conference held in Novi Ligure, at the Civic Library on 1st October, 2016.

The research in question examines 100 years of studies and missions carried out from 1914 to 2014.

The leading party of this project is the Oltregiogo Association, the technical coordinator is Arch. Roberto Burlando and the scientific director is Prof. Paolo Stringa, president of the Alte Vie Association, faculty of the University of Genoa. 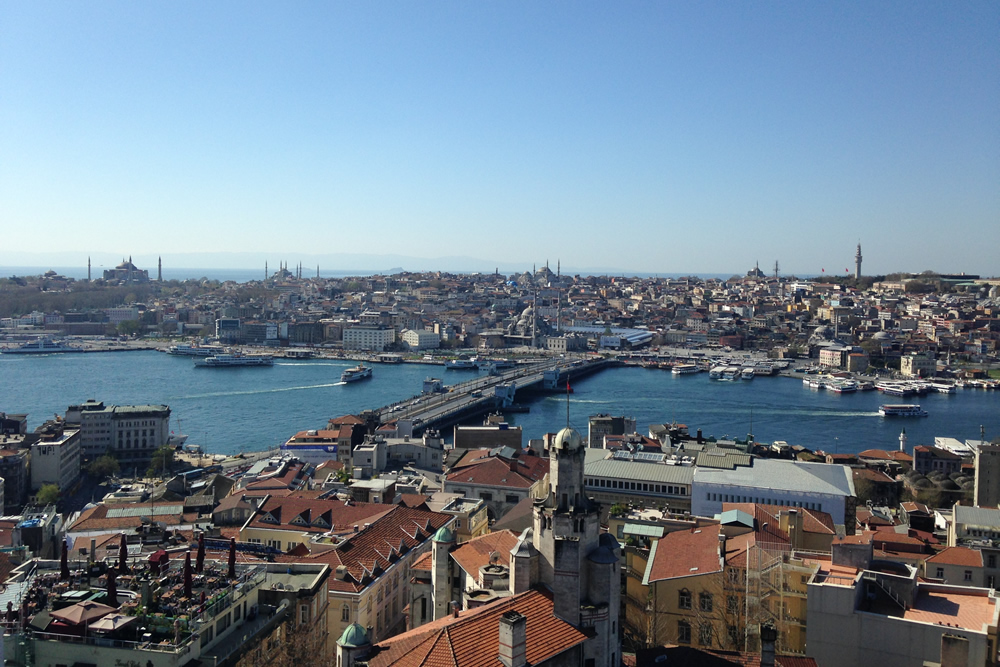 Study materials were collected, especially in Bonifacio, and geometric surveys were made in order to prepare a large repertoire of photographic documentation starting in the sixties of the last century.

Starting from 1982, every calendar year, Corsica has been the subject of further specific research missions in terms of knowledge of the landscape and settlement heritage of the Ligurian and Genoese traditions.

This research, after several publications, ended in 2014 with the publication, by Prof. Stringa, with specific funding from the Association Oltregiogo, of the Volume “Ligurian Traces between Oltregiogo and Overseas”.

SARDINIA – CASTELSARDO AND SAN PIETRO AND THE SANT’ANTIOCO ISLANDS.

The Ligurian presence in Sardinia is evident in two specific areas of the island. The first is in its northern territories occupied, from the 12th century, by the Doria family, from Alghero to Nurra.

Castelgenovese which changed its name to Castelaragonese in the middle of the 15th century and then with the Savoy occupation in 1769, took the name of Castelsardo.

The second area of Ligurian influence is made up of the two islands of San Pietro (Carloforte) and Sant’Antioco (Calasetta) located along its southwestern coasts where, in the 18th century, most of the Genoese population from the Tunisian island of TABARCA was moved. 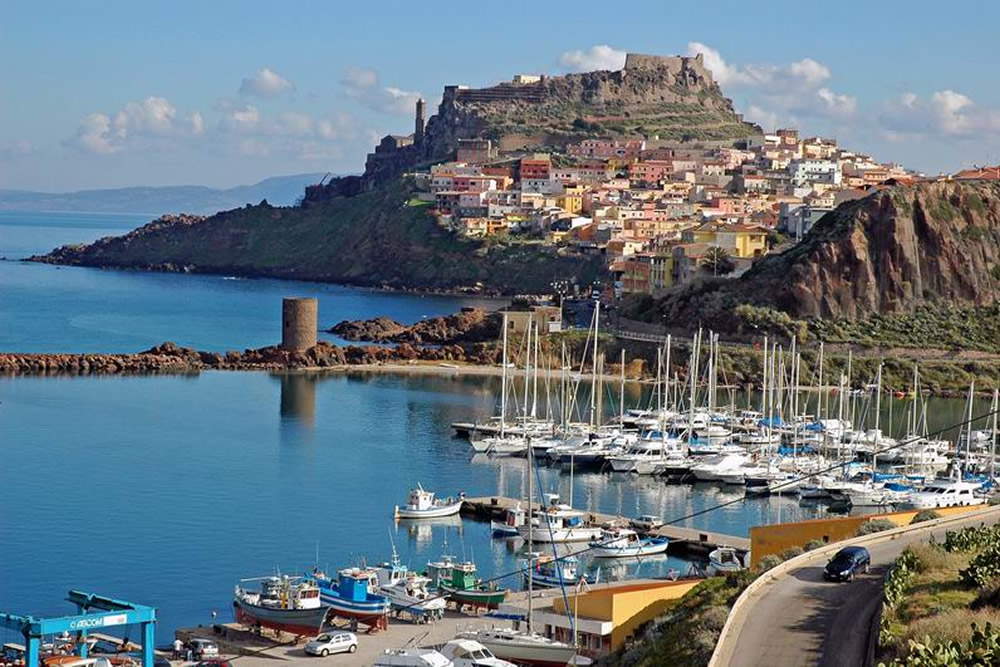 GREECE – THE ISLAND OF CHIOS

The island of Chios entered, for the first time in 1172 into the Mediterranean area of influence of Genoese trade and commerce.

It remained firmly in possession of the “MAONA DEI GIUSTINIANI” for over two centuries from the first half of the 14th century onwards.

It was precisely the Ligurian families, gathered in the Maona, who defined the main urban structure of its capital, together with the infrastructure scheme of the entire island territory.

This is still evident today in the area of Cambis located near the capital and still, even now, inhabited by the most ancient aristocracy and nobility of the island. The twelve villages of medieval foundation that highlight the rural population of Chios find a reference in to as many Ligurian families.

The first Genoese Fondaco (warehouse) in Istanbul dates back to the end of the 12th century and includes a small port on the left bank of the Golden Horn.

The main urban evolution of this first settlement took place between the mid-thirteenth century and the end of the fifteenth century.

In the early years of the 15th century, further territorial development was highlighted with the annexation of the two nearby villages of Spiga and Lagorio.

The testimony of this history is clearly recognizable in the substantial permanence of its medieval urban fabric, in parts of the walls and, above all, in the large circular tower dominating its landscape. 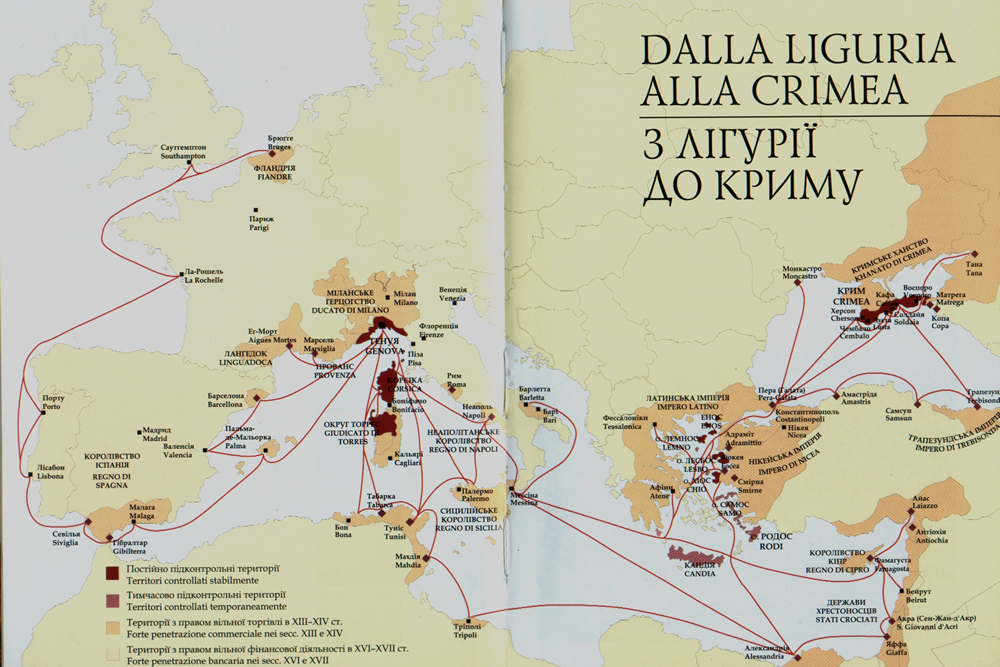 The presence of Genoese ships in the natural port of Cembalo, today Baklava, located at the western end of the southern coast of the Crimean peninsula, had already been documented around the first half of the 15th century. A great number of the church and castle towers of the Genoese settlement are today clearly visible.

These fortified citadel constructions were begun by Consul Simone dell’Orto on 12th October 1357. The strategic works perched along the hill overlooking the entrance to the deep natural inlet of its port, continued until the second half of the 16th century. In 1432 it also became an Episcopal seat.

In 1365 the Genoese permanently settled in Soldaia, constituting a monopoly of maritime bases extended from Galata-Istanbul to Caffa-Teodosia.

Thus began the stone reconstruction with a curtain of walls, towers and castles along the entire fortified perimeter. The fortified complex was completed in 1414 with the completion of the large door framed by the two corner towers. The entire perimeter consists of 20 towers, three of which are part of the structure of the Castle of Santa Croce.

Most of the Genoese medieval structures are currently well preserved and interesting restoration and recovery initiatives have been organized under the guidance of the Sudak Museum of Antiquities, an authentic protagonist in the site’s revitalization. 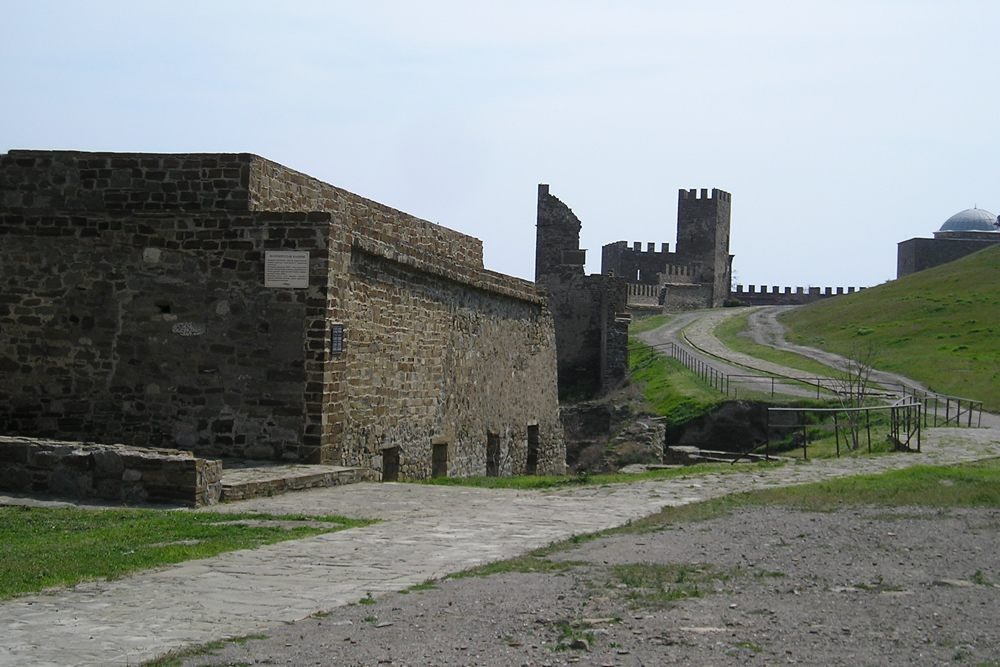 Teodosia began to be frequented by Genoese merchants who gave it the name of Caffa from the mid-thirteenth century onwards. In 1313 a council of eight enlightened men was formed in Genoa with the task of reorganizing all the affairs in the Black Sea and a new consul was elected who prepared a true urban plan for the development of the settlement.

The urban fabric, is still perceptible today in the various levels of walls and in the military and religious buildings, the main survivors, and are organized in the Ligurian trilogy of the Castle, the Citadel, inhabited exclusively by Genoese and the Borgo (the town).
In the mid-fifteenth century the two areas of the city reached a development of about 6 kilometers: within the first circle there were about 6000 houses, 11000 between this and the most external one.

Its urban shape and form recalls that of Genoa to which it is often compared for the consistency of its traffic, the demographic dimension and the overall image of its built-up areas.
Many important restoration works have allowed the conservation of the main architectural distinguishing features, such as walls, towers, castles and religious buildings.

We find, from the sixteenth century onwards, important “Ligurian traces” in the areas of buildings and construction overseas especially in Central and South America.

Amongst the many small towns the settlement of Cachoeira, in the State of Bahia, has been studied over the years.
Founded around the middle of the 16th century by exponents of the Genoese Adorno family in order to set up a sugar factory, it has urban and architectural characteristics typical of the Genoese motherland.

This was the first time that cane had sugar arrived in Italy and Europe, this thanks to the Adornos. Until then it had been unknown and sugar from the cultivation of beets had been used.

The Villa degli Adorno and their Gentilizia Chapel are located in the center of a pentagonalshaped factory building that recalls the articulations and construction methods that were widespread in 16th-century rural Liguria.

The Villa, the Chapel and the Ancient Village of Cachoeria are still discreetly preserved today also due to the fact that they have been declared a National Monument by the Brazilian State. 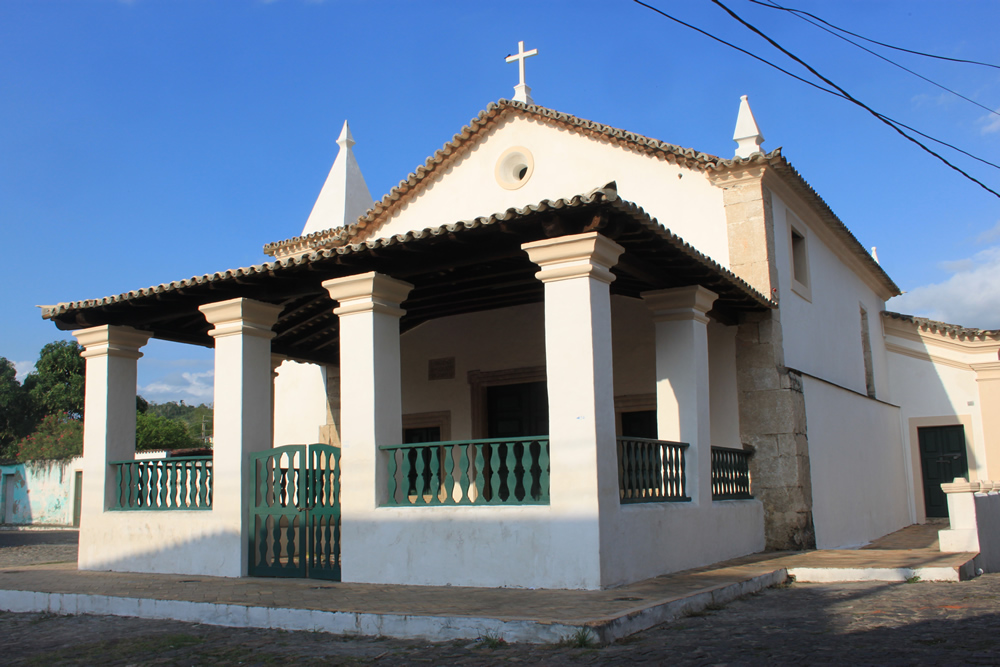